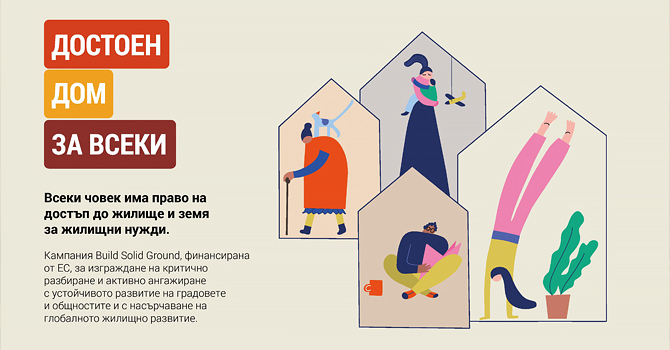 Cities cannot respond to the need for housing. People move there in large numbers to find work, but the population growth rate exceeds the rate of adequate housing. By 2030, three out of every five people in the world are expected to live in cities, and the ghetto population will double, reaching 2 billion.

These issues are the focus of Build Solid Ground, the new global housing and housing rights campaign of Habitat for Humanity International. The advocacy campaign, which goes under the motto that everyone deserves to have a decent home and feel protected from threats to their property, is already working in over 30 countries around the world.
Within Build Solid Ground, Habitat Bulgaria launches a series of meetings in Bulgarian municipalities and universities on the challenges and opportunities of urbanization.

Currently, one in every seven people on the planet lives in unduly built and overcrowded urban areas, with insufficient infrastructure, often without access to electricity, water and sewer.

In 2018-2020, Habitat Bulgaria will visit thirty municipalities across the country. The municipalities planned for 2018 are Smyadovo, Targovishte, Antonovo, Gabrovo, Pavlikeni, Nessebar, Burgas, Dupnitsa, Kyustendil and Sofia. During the meetings in the municipalities, the options for renovation of the poor neighborhoods will be considered – namely, improving living conditions and providing access to basic sanitation.

The need to improve land rights will also be discussed. Globally, 75% of people in the world do not have adequate documentation of the land on which they live and millions live in constant fear of eviction, unwilling to leave their homes where they have sometimes lived for a lifetime. Habitat for Humanity experts are adamant that with secured property or use rights, people live without fear of eviction and invest more in their families, communities and the future.
At the same time, the university meetings will seek to provoke students’ interest in urbanization, as well as to explore their proposals for innovative solutions to problems, the focus of the campaign.

“Urbanization poses a huge challenge to sustainability in terms of housing, but if it is well planned, it can serve as a powerful tool for sustainable global development”, says Mincho Benov – National Director of Habitat Bulgaria.