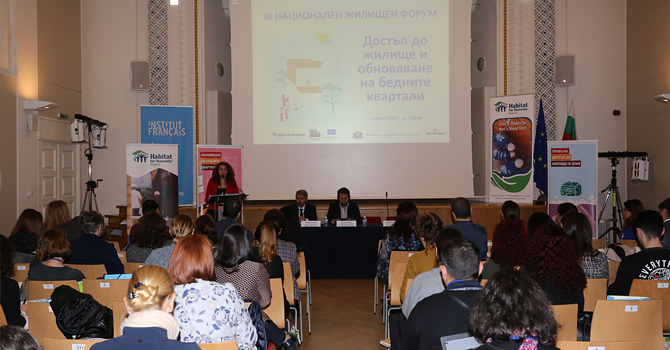 With two National Housing Forums held in 2013 and 2016, Habitat Bulgaria has sharpened the attention of institutions and the public on the need to improve housing conditions in the country. This year, the organization is focusing on the growing need to secure access to housing and renovate poor neighborhoods by organizing the third National Housing Forum with the focus on access to housing and renovation of the poor neighborhoods. The forum is implemented within the Build Solid Ground project, approved and funded by the Development Directorate-General for International Cooperation and Development (DG DEVCO) under the Development Education and Awareness Raising (DEAR) strand. Partners of the event are the French Institute in Bulgaria and the Wienerberger Group.

Countries in the world are increasingly driven by the desire to revive a global commitment to sustainable urbanization. In September 2015, at the New York Summit on Sustainable Development, the United Nations adopted a new development agenda called: “Transforming the World: Agenda 2030 for Sustainable Development”. The document identified 17 global sustainable development goals and in particular, Goal 11: Sustainable cities and communities. The first of its 10 specific objectives is to: “Ensure that everyone has access to adequate, safe and affordable housing and basic services by 2030, and that ghettos and poor neighborhoods are renovated.”

In October 2016, more than 167 countries welcomed the New Urban Agenda in Quito, Ecuador, during the United Nations Third Global Conference on Housing Policies and Sustainable Urban Development Habitat III. During the Dutch EU Presidency, on 30 May 2016, the Amsterdam Pact was adopted, which established the Urban Agenda for the EU.

These important global developments have identified the main highlights of the Forum agenda:

Panel I. Agenda 2030, Global Sustainable Development Goal 11 and Access to Housing for All and Poverty Refurbishment by 2030. The global framework outlined by the Sustainable Development Goals. UN, Habitat III – The New Urban Agenda, Urban Agenda for Europe.
Panel II. Bulgaria and Agenda 2030 on access to housing and renovation of poor neighborhoods. The position of the institutions committed to achieving the Sustainable Development Goals in terms of access to housing and renovation of poor neighborhoods.
Panel IІI. Non-governmental sector initiatives to improve housing conditions and partner with municipalities for housing policies.
Panel IV. Good practices of Bulgarian municipalities for improving the living conditions in poor neighborhoods. The challenges that Bulgarian municipalities face for renovating poor neighborhoods and the approaches they apply to securing the right of access to housing.
The full program of the event can be viewed in Bulgarian HERE.

The participants of the forum, including over 80 top-level local experts, discussed that Bulgaria, as a party to a number of international agreements, has committed itself to achieving the set goals, but at present the level of implementation is unsatisfactory. The right of access to housing is not explicitly enshrined in Bulgarian law. For decades, no solution has been found for illegal constructions, which are the sole home of their inhabitants. The municipalities do not have the housing and financial resources to provide alternative accommodation for the needy. Poor neighborhoods are often unregulated and lacking the necessary infrastructure.

“The draft National Housing Strategy, which was published for public consultation, did not address the real problems of the so-called segregated areas. I hope in the improved version of the document we will find the answer to the question of how we will solve the housing problems of the people who live in these areas and how to overcome poverty”, emphasizes Daniela Ushatova, Team Leader “Municipal Services and Finance”, National Association of Municipalities in the Republic of Bulgaria.

Those in attendance agreed that the adoption of a long-term and pragmatic national housing policy, supported by targeted funding, is needed to address these issues. The Ministry of Regional Development and Public Works (MRDPW) is in the process of developing and discussing a new National Housing Strategy, which should show the political will to secure the right of access to housing and renovation of poor neighborhoods.